This is one of my favorite mods on my 2021 model 3. Honestly, installing this was probably the hardest thing I’ve ever had to do in my life. The install is fairly simple until you get under the glove box. Trying to connect this thing was very hard due to other wires that block the insert. I have skinny hands, but still nearly impossible. But, I did it after 4 hours of my time.

After installation, this thing is a BEAST. I love it. Had it for a week now, and honestly enjoy looking at it. Look OEM as well. Do I recommend it? Yes. 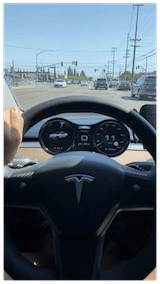 This has to be one of if not the best Tesla Aftermarket Accessory for the Tesla Model 3. This should be standard on every Tesla. It doesn't intrude on the view. The display is big. Everything is legible. The information is useful. Several customization options. The firmware can be upgraded. The install took about an hour and was not too difficult. Extending the steering it help to remove the top of the column and you will have to flip upside down to access the cable underneath the glove box. I highly recommend this. Looks close to factory after installation.

A great addition to your model 3 or Y. It looks like it came with the car. I like that the auto pilot warnings are right in front of my and that I don’t have to take my eyes off the road.

The install was fairly simple. Just a bit time consuming. As another reviewer pointed out, the plug under the footwell was the hardest part. Make sure you have a pry tool and if you don’t feel comfortable, have it professionally installed.

The only thing I wish it had was a setting to turn off the white light. It would also be cool to see tire pressure, media, navigation, and energy usage on either screen. The manufacturer said they are looking to implement these features in a future software update!

Overall, a fantastic addition to an already amazing car that doesn’t look “cheap”.

A
A.
MUCH better for driver feedback and SAFETY, Model 3/Y

I owned a Tesla Model 3 for 2.5 years putting over 30,000 miles on that car, after previously owning first a 2013 Model S85 and then a 2015 Model S P85D (with Ludicrous upgrade). I found the lack of a direct "line of sight" driver's display a regular frustration with the Model 3 and then the followup Model Y. Finding this "Driver's Display" aftermarket unit held the promise of resolving my ONE NIGGLE with the interior design of the Model3/Y, so I ordered this with some concern about the installation "challenge." There are a COUPLE of different do-it-yourself videos for this install and after watching both, I had the confidence to take on this challenge myself.

Sadly, I had a bit of a STUPID start on the install, as I did one of my hardest running workouts in the last year that very MORNING and then started on the disassembly and install. BAD MOVE on my part. Taking the dash apart for the install was easy-peezy and I got to the point of reconnecting the power connection to the car's computer, working upside down under the dash, and....after the strain of my workout AND the absolute CHALLENGE to get that plug back into the car's computer module, ....I had to give up for that day. I had bruised both hands trying to manipulate the plug back into the very hard to see socket.

I quit for that day, and left my new Model Y all dash apart sitting in my garage for the night. The NEXT DAY I carefully planned a very easy morning workout, had a light lunch after, and then went back to getting that final power plug reconnected.....I was able to get that CHALLENGE MET in about 20 minutes ON A FRESH BODY. Within the next 30 minutes I had all the dash pieces back together and the whole system up and running!!!

The INSTALL is, as I note, a CHALLENGE, as the new power plug could be MUCH BETTER designed to make the reconnection less difficult, but it can be done by anyone with reasonable patience and a relatively fresh body. Small hands and an LED headlamp help a lot as well. But this is a "job" that could be done in about 90 minutes from start to finish when everything goes right the first/second/or even fifth time trying to get that power plug back into the remote socket it came out of.

I find this display better and more quickly informative for speed AND the "nagging" display for moving something on the steering wheel when on AutoPilot/AutoSteer is MUCH quicker to notice on the whole left display here than the harder to scan text on the large Tesla panel. IMHO, if off-line-of-sight displays were so IDEAL, high performance planes and race cars would have them. HIGH PERFORMANCE control systems use HUD displays and anything significantly deviant from LINE OF SIGHT is a safety risk in several potential ways....

Watch the install videos at LEAST a couple of times, have a widely available set of nylon upholstery install tools (Amazon for under $5) and you too will have a most impressive driver's information display for YOUR TESLA too! 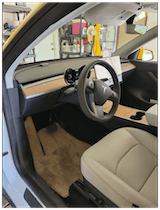 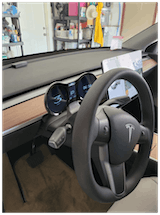 installation wasn't too bad. I removed the glove compartment to make getting at the connector on the computer module easier.
What nobody has mentioned is that there is a settings menu (see my photos). Hold the right thumbwheel down and the voice command prompt will happen (ignore it). The menu comes up on the right display. Scroll with the wheel, push the thumbwheel button to choose to change, scroll to each setting and push thumbwheel to select. Scroll through the bottom of the first menu ti get to the second menu.
To set Km to miles or vice-versa, go to display menu on main screen. It will already show the correct setting so toggle it and the heads up display will change.